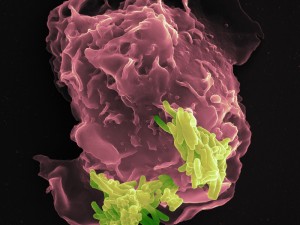 Contact between tuberculosis pathogen and phagocyte (macrophage). The close contact between the pathogen and defense cell enables pigments such as phthiocol to enter the host cell. The recognition by the aryl hydrocarbon receptor leads to the rapid mobilization of defensive measures.
© MPI for Infection Biology / Volker Brinkmann

Max Planck researchers have discovered a completely new way in which the immune system recognizes pathogens. The aryl hydrocarbon receptor has long been a focus of research for pharma-cologists and toxicologists, as it recognizes environmental toxins. However, it also plays an important role in the immune system. A team of scientists headed by Stefan H. E. Kaufmann at the Max Planck Institute for Infection Biology in Berlin has discovered that virulence factors of bacteria which have invaded the body also bind to the aryl hydrocarbon receptor. As a result, the innate immune response is activated and the factors are immediately broken down. With this finding, the scientists have identified a hitherto unknown component of the immune system: bacterial virulence factors can not only be neutralised by antibodies, but also directly destroyed.

Until now, immune biologists have largely ignored the possibility that the immune system directly destroys bacterial virulence factors. The role of the aryl hydrocarbon receptor, which is expressed in many cells including immune and epithelial cells, is therefore all the more surprising. Thus far the receptor was primarily known as a binding site for environmental toxins, among them the extremely harmful TCDD – a dioxin that causes devastating organ damage even in minute concentrations. “However, it occurs in a wide range of organisms from threadworms to insects through to humans. If it is found in so many living organisms, the reason is certainly not just to recognize environmental toxins, but also to defend against infections,” says Pedro Moura-Alves from the Max Planck Institute for Infection Biology.

The researchers therefore set out to identify bacterial molecules with a similar structure as the known binding partners of the aryl hydrocarbon receptor. They found what they were looking for in the form of bacterial pigments that are supposed to protect the pathogens but damage the body. Mathematical models have shown that both the green-blue phenazines of the bacterium Pseudomonas aeruginosa, which causes nosocomial respiratory infections, and the yellow naphthoquinone phthiocol of the causative agent of tuberculosis Mycobacterium tuberculosis fit in the binding pocket of the receptor.

Experiments in mice then confirmed how important the aryl hydrocarbon receptor is for the immune response. Following infection with the lung pathogens, animals without these receptors develop more severe symptoms, have more bacteria in their lungs and are more likely to die. Evidently, the immune system does not recognize the foe early enough without the aryl hydrocarbon receptor. “For the pathogen, the bacterial virulence factors are a blessing and a curse at the same time: on the one hand, they facilitate infection of the host organism, but on the other hand, they help the host to track down the microbe,” says Kaufmann.

What is special about the aryl hydrocarbon receptor is that it binds directly the bacterial pigments and then triggers the expression of several genes in the cell nucleus responsible for breaking down the virulence factors. To this end, it migrates from the outside into the interior of the nucleus where it binds to DNA. The aryl hydrocarbon receptor is therefore a receptor and a transcription factor rolled into one and hence can react promptly to infection. By contrast, other receptors of the immune system have to rely on auxiliary proteins that relay the information about pathogens into the nucleus.

As a next step, the researchers want to find out what other transcription factors the aryl hydrocarbon receptor interacts with and what specific enzymes are responsible for breaking down the bacterial virulence factors.

Research News of the Max-Planck-Gesellschaft, August 13, 2014