Transfer of a few immune cells can protect immunodeficient patients 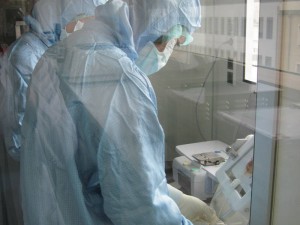 When patients have to undergo a bone marrow transplant, the procedure weakens their immune system. Viruses that are usually kept in check in a healthy immune system may then cause potentially fatal infections. Scientists at Technische Universität München (TUM), together with colleagues from Frankfurt, Würzburg and Göttingen, have now developed a method which could offer patients conservative protection against such infections after a transplant. The method has already been used to treat several patients successfully.

The cells of the human immune system are created from special stem cells in the bone marrow. In diseases affecting the bone marrow, such as leukemia, the degenerate cells must be destroyed using radiation or chemotherapy. Subsequently, the hematopoietic system has to be replaced with stem cells from the blood of a healthy donor. Because of the resulting temporary weakening of the immune system, patients are more exposed to viruses that would normally be warded off.

The cytomegalovirus (CMV), which can cause serious damage to lungs or liver in persons with a weakened defense, poses a major clinical problem. In healthy human beings, a CMV infection will usually not produce any symptoms, since the virus is kept at bay by specific immune cells. In their work, the scientists were able to demonstrate that the transfer of just a few specific immune cells is sufficient to protect the recipient with the weakened immune system against infections. To do this, they used T cells that can recognize and kill specific pathogens.

Tested in an animal model

Dr. Christian Stemberger, first author of the study, and his colleagues, first isolated T cells from the blood of healthy donor mice. These immune cells were directed against molecular elements of a bacterial species which normally causes severe infections in animals. The T cells were then transferred to recipient mice that, due to a genetic modification, could no longer produce immune cells of their own – similarly to patients suffering from leukemia.

Following the T cell transfer, the researchers infected the treated recipient mice with the bacteria. The results showed that the animals now have effective immune protection against the pathogens, preventing them from becoming ill. “The most astonishing result was that the offspring cells of just one transferred donor cell were enough to completely protect the animals,” Christian Stemberger explains.

Finally, the scientists used virus-specific T cells to treat two critically ill patients. Due to a congenital immunodeficiency and leukemia, respectively, stem cell transplants had to be performed on the two patients. Weakened by the procedure, both patients developed CMV infections.

Using a new method, the scientists therefore isolated T cells specifically programmed to target the CMV virus from the blood of the donor and transferred small numbers of these cells to the patients. After only a few weeks, the virus-specific cells proliferated. At the same time, the number of viruses in the blood dropped. “It is a great advantage that even just a few cells can provide protection. This means that the cells can be used for preventive treatment in low doses that are gentler on the organism,” Dr. Michael Neuenhahn, last author of the study, explains.

The potential of the identified T cells will now be examined in a clinical study. In addition to an innovative method for cell purification, scientists also have at their disposal a new TUM facility for the sterile manufacture of cell products. In TUMCells, cells can be produced in highly-pure conditions, in so-called clean rooms. In the future, the scientists want to use recent results and TUMCells to develop innovative cell therapies.