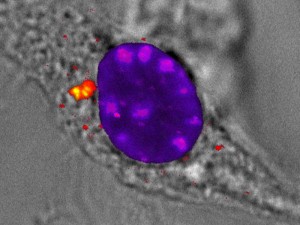 The illustration shows a fluorescence image of viral-DNA-Rad50-CARD9 complexes (yellow) in the cytoplasm (transmission light) of a cell. After infecting the cell with a DNA virus, the scientists mark the individual molecules to be observed in the cell with different fluorescent dyes. Here, the DNA is represented in blue/magenta, Rad50 in green and Card9 in red. © A. Rottach / LMU

Cells have to protect themselves: against damage in their genetic material for one thing, but also against attack from the outside, by viruses for example. They do this by using different mechanisms: special proteins search out and detect defects in the cell’s own DNA, while the immune system takes action against intruders. Scientists from the Technische Universität München (TUM) and Ludwig-Maximilians-Universität München (LMU) have now shown that the two protective mechanisms are linked by a shared protein. The results of their study have been published in Nature Immunology.

In human cells, DNA occurs only in the cell nucleus as the carrier of genetic information. In order to protect it, specialized proteins regularly scan the individual strands for defects, and repair them. One example of this is the protein Rad50, a DNA sensor that binds to DNA and detects defective sites. A team of scientists headed by Prof. Jürgen Ruland of the TUM together with colleagues from the LMU have now discovered another important task performed by Rad50.

There is normally no DNA in the cytoplasm surrounding the cell nucleus. However, if any does turn up there, it is frequently foreign DNA from a virus, for instance, that has infected the cell. Just like humans, some types of viruses use DNA to carry their genetic information. Thus the innate immune system has developed alarm mechanisms to detect foreign DNA in cytoplasm quickly and effectively, and activate the immune system by producing messenger substances.

However, it remains largely unclear just how this activation process occurs in the cytoplasm. In their study, lead author Dr. Susanne Roth and her colleagues have now shown that the DNA sensor Rad50 from the cell nucleus is also an important trigger for antiviral defense. „It is very surprising even for us that Rad50, which specializes in DNA in the cell nucleus, also detects foreign viral DNA and acts as a connecting link for the corresponding immune response“, says Prof. Jürgen Ruland, explaining the significance of the findings.

In their experiments, the participating scientists infected immune cells with a virus that introduced its DNA into the cytoplasm. They were able to show that Rad50 bound to the viral DNA in the cytoplasm, even though it normally docks onto damaged DNA in the cell nucleus. A crucial factor was that Rad50 interacted with a specific signal protein (CARD9) of the immune system at the same time, forming a complex. The researchers succeeded in demonstrating this connection in cells for the first time.

The formation of the complex activated a signal transduction pathway in the cell which ended with production of the messenger substance interleukin 1β. This vital „global player“ of the immune system is responsible for the onset of fever as a defense mechanism against pathogens, but also has a role in autoimmune diseases, such as rheumatoid arthritis.

In order to confirm their results, the researchers then used cells containing either no Rad50 or no CARD9, and again introduced DNA into their cytoplasm. Both cell types then produced far less interleukin 1β, as the Rad50-CARD9 complex could not be formed in order to activate the alarm system.

„Too much or too little of IL-1β can lead to a defective immune response or chronic disease, so its production must be strictly regulated by the body“, explains Jürgen Ruland. „Now that we know Rad50 and CARD9 are important triggers for the alarm system and IL-1β production, we can gain a better understanding of many immune responses and develop strategies to influence them therapeutically.“