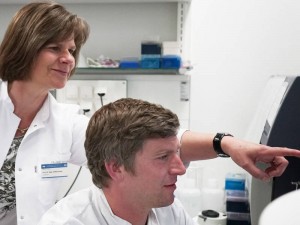 A question of tolerance: Liver transplants in patients with hepatitis C.

Chronic hepatitis C virus infections are among the most common reasons for liver transplants. Because existing viruses also infect the new liver, the immune system is highly active there. Despite this, the new organ is not rejected, as scientists from the Helmholtz Zentrum München and the Technische Universität München (TUM) have now discovered. The long-term stimulation of the innate immune system by the virus actually increases the probability of tolerance.

Over 150 million people throughout the world suffer from chronic infection with the hepatitis C virus (HCV), which causes massive damage to the liver. Advanced liver diseases often necessitate liver transplants. In the new clinical study Dr. Felix Bohne and his colleagues studied together with Prof. Alberto Sánchez-Fueyo from King’s College London 34 hepatitis C patients at the Liver Unit of the University Hospital Clínic de Barcelona who had received new livers.

The researchers had two objectives here: first, they wanted to gain a better understanding of the mechanisms that enable the body’s own immune system to tolerate the new organ despite the HCV infection; second, they were looking for factors that could act as biomarkers for tolerance in the patients.

“If tolerance could be reliably predicted based on certain markers, many patients could stop taking immunosuppressants after a certain period of time,” explains Dr. Felix Bohne, lead scientist of the study. Patients must take these strong drugs after transplants. They suppress the immune system so that the body does not identify the new organ as foreign and reject it. For patients with hepatitis C, this is a particular burden, as they need a stable immune system after the transplant to control their chronic HCV infection.

During the study, the patients stopped taking the immunosuppressants. They were observed for twelve months to see which of them could also tolerate the new organ without the drugs, and which of them did not. The scientists took liver and blood samples from the patients prior to and after the cessation of the drugs. Detailed immunological tests on these patient samples were carried out under the leadership of Prof. Ulrike Protzer of the “Immunmonitoring Platform” at the Institute of Virology. The scientists compared the patients with each other and looked for any differences that arose in tolerant patients only.

And the scientists struck gold: a certain group of genes was very active only in the livers of tolerant patients. The genes in question belonged to the type I interferon system, which targets viruses like HCV as part of the innate immune system. As the results showed, an anti-viral mechanism does actually enable the patients to better tolerate a foreign organ.

Ulrike Protzer provides a possible explanation for this: “When the interferon system is constantly activated as is the case in some chronically-infected patients, it downregulates other immune reactions in order to protect the body. This state could act like a natural immunosuppressant and reduce the rejection of the organ.”

In addition to the genes of the type I interferon system, a second factor was considered as a possible marker. This was discovered by the researchers in a previous study on liver recipients who did not have a HCV infection. Patients were very likely to be tolerant if they had a certain ratio of two different subgroups of immune cells in their blood. This ratio was also a reliable predictor of tolerance in the new study involving HCV patients.

Dr. Tanja Bauer and Carolina Russo from the Immunmonitoring Platform at the Helmholtz Zentrum München were also involved in the study as cooperation partners. Felix Bohne was awarded a DFG (German Research Foundation) grant for his research work.