The about-face in US climate policy may amount to little more than a small step backward in fighting climate change, but it is a worrying attack on science itself. A report from the US. 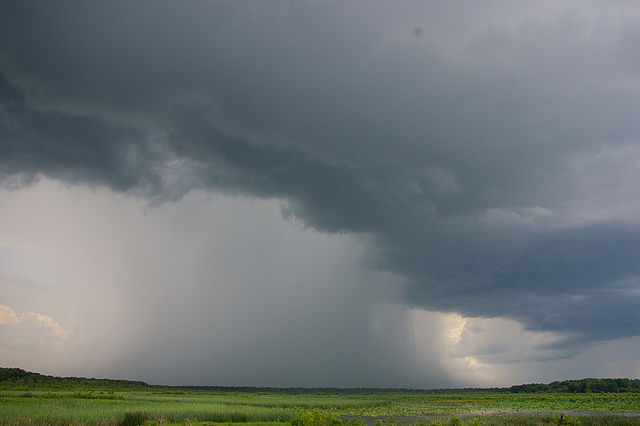 Bleak prospects: The US administration is stripping climate research of its scientific foundation. © Bidgee. CC BY 3.0. Wikimedia Commons.

The Executive Order signed by US President Donald Trump last week that relaxed environmental regulations came as no surprise: Trump wants to roll back regulations for coal-fired power plants, revive the coal industry and simplify the use of fossil resources in the US.

At this point, it is difficult to estimate the knock-on effect of this Executive Order. Existing laws cannot be replaced quite so quickly, legal lawsuits could delay the plan by many years, and the Republicans might lose their majority in Congress in just two years’ time. Nevertheless, many people feel that the Paris climate targets are in danger. In my view, however, the truly worrying developments are taking place elsewhere.

The climate agreement reached in Paris makes it clear that everyone has to play their part. If the US, the country with the highest per capita emissions in the world, should fail to meet its CO2 reduction targets, then others could follow suit. If all other countries were to delay their climate protection efforts by eight years, the two-degree climate target would definitely be out of reach.

The optimistic view is that the Executive Order will not change much, as coal is now barely profitable. Gas and renewable energies are becoming cheaper, and the collapse in employment in the coal industry is the result of falling demand and greater automation, rather than regulations. States such as California are also set to adopt stricter rules and others will follow. The energy technologies of yesteryear are no longer profitable and energy companies are looking to the future.

Trump has claimed on multiple occasions that man-made climate change is a hoax. The man he appointed as head of the Environmental Protection Agency (EPA), Scott Pruitt, recently said he does not agree that CO2 is a primary contributor to global warming, contrary to all scientific evidence, and that the debate must be continued. These positions are nothing new, but the vehemence with which half-truths are cobbled together into convenient realities is alarming.

First, scientific facts are denied and alternative facts created. Worse still, lies become socially acceptable and seem to do the administration no harm. Second, people are led to believe that a dispute exists among experts: last week, four climate experts were invited to a hearing in the House Committee on Science, Space and Technology; one represented the scientific consensus while the other three stood for opposing minority opinions. It does not matter who is right – it is sufficient to give the impression that the whole issue is disputed. Third, a budget is then proposed that makes climate research practically impossible. Measurement series would be discontinued, data no longer analysed and facts ultimately eliminated. And, fourth, an astonishing process of self-censorship takes place at government agencies and research institutes. For fear of budget cuts, terms such as risk or climate change suddenly disappear; instead, people talk only of the economic benefit of forecasts of weather or water availability.

Climate change is not a figment of the imagination

Will climate change soon take place only in the minds of a few scientists, who remain silent out of fear? We must not accept this dismantling of science. We must stand by the view that facts still have their place in politics. Scientifically sound decision making and action is a cornerstone of our society, but science does not seek to – and should not – tell society what to do. Rather, it has a duty to demonstrate facts as completely and objectively as possible and to put them in context. Where necessary, science must also point out risks. It must develop solutions and communicate these in such a way that they are comprehensible and useful for society.

Science and its institutions have a tendency to hide behind figures and do almost no lobbying. That is fine as long as there is a consensus that we should minimise societal risks, and will in the long term reach better decisions with facts than without them – be they tomorrow’s weather forecast, the avalanche bulletin or the hazard map, to name a few examples from environmental research. If facts are distorted or censored, however, scientists must find new channels and give a better explanation of what they do, what insights are certain and why a solution-oriented dialogue is in the long-term interests of society.

In return, politicians and society must accept the results of research – even if they are inconvenient – and be prepared to discuss them and act accordingly. We must see the world as it is, not as we would like it to be. To put it in the words of Sherwood Rowland, who discovered the mechanism by which chlorofluorocarbons (CFCs) cause the hole in the ozone layer: “What’s the use of having developed a science well enough to make predictions if, in the end, all we’re willing to do is stand around and wait for them to come true?”

Reto Knutti is currently spending one year doing research in Colorado, US.