Empty nets and few species – environmental hormones are believed responsible for the diminishing numbers of fish. How damaging are these substances really, though? Studies that depict a complete picture of the lives of fish provide clues.

You cannot see, smell, or taste them – and yet, environmental hormones are components of many materials and products. They can be found for example in colorants and dyes, pesticides, cosmetics, plastics, and in pharmaceuticals. Environmental hormones are molecules that behave like hormones, because they resemble them in their structure. It has been suspected that the substances getting into an organism via the air, the skin, through foodstuffs, and through medications influence the human reproductive system and cause a reduction in the quality of spermatozoa, with an associated drop in male fertility. The animal world is affected as well. In addition to other factors, environmental hormones are believed responsible for the reduction in fish populations. 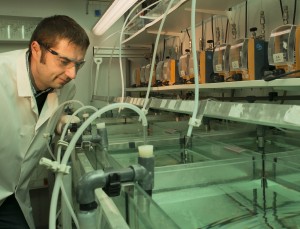 Flow-through facility at Fraunhofer IME. All test aquaria can handle adult animals as well as those at the larval stage.
© Fraunhofer IME

Experts and scientists have been in disagreement for over two decades about whether fish stocks and amphibian populations are actually threatened by any stress from hormonally active substances in bodies of water, because the effects of the environmental hormones actually remain insufficiently understood. Researchers of the Fraunhofer Institute for Molecular Biology and Applied Ecology IME in Schmallenberg, Germany, want to shed light on this question. To investigate the effects of hormonally active substances on fish, the scientists have established and continually refined a model using life cycle studies of the zebrafish (Danio rerio), a freshwater fish. “Using the life cycle test, we can record all of the relevant aspects in the life of fish within a reasonable period of time,” says Matthias Teigeler, an engineer in the Ecotoxicology Department at IME. “These include the growth, the embryonic and especially the sexual development, as well as the animals’ ability to reproduce. Those are factors that react sensitively to hormonally active substances.”

Groups of like-sized fish are exposed to potentially active hormonal substances at differing concentrations while in a flow-through facility. A control group of fish kept in water with no hormone load serves as a comparison with which the possible effects on the subject animals can be discerned. “A life cycle test begins by employing fertilized eggs obtained from unstressed P generation (parental) animals. The fish embryos hatch three days later. We determine the number of surviving animals and record their lengths in the computer. After about three months, the animals are mature enough to be able to reproduce. Their ability to reproduce can be accurately determined from the number of eggs they lay. During the spawning phase, we remove eggs from the experimental aquaria each day and count them. Since they are transparent, you can examine whether they were fertilized or not,” explains Teigeler.

The researchers were actually able to determine that zebrafish were no longer able to reproduce – mating and deposition of eggs did not occur – under administration of very low concentrations of ethinyl estradiol, a synthetic estrogen and component of contraceptive pills. They observed negative effects with other substances under test as well. Tests with the synthetic sexual hormone trenbolone led to a masculinization of the animals, for example. The gender ratio shifted considerably. 100% of the fish developed as males following administration of the test substance. This could also be observed for aromatase inhibitors employed as a fungicide for plant protection. As a comparison, researchers would expect a gender ratio of 50 percent male to 50 percent female in the unstressed control group. “Several well-known substances negatively influence the hormone system. However, other factors besides hormonally active substances are under discussion as being responsible for the reduction in fish species, such as poorer constitution of waters and climate change,” says Teigeler.

Manufacturers of chemicals for protecting plants meanwhile anticipate being confronted with a prohibition if it turns out that an active ingredient causes a lasting disruption to the hormone system of humans and animals. Meanwhile, the pharmaceutical industry must likewise present data on the effects of hormone-like substances in bodies of water if they want to bring a new product out on the market in Europe. The testing system of Fraunhofer IME enjoys a high level of acceptance in industry as well as among regulatory authorities. Moreover, IME researchers offer support through their expertise with life cycle experiments, studies, and conclusions to committees of the OECD, the EU and their Member States having to develop guidelines for fish testing and to evaluate of test results. They help find answers to questions dealing with problems of hormonally active substances in the environment.

Research News of the Frauenhofer-Gesellschaft, Apr 01, 2014