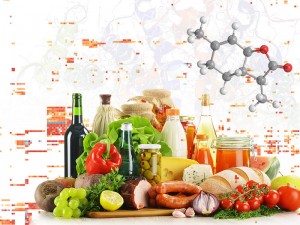 The typical aromas of foodstuffs are encoded by just a few key odors. © A. Dunkel, Ch. Sturz / TUM

How are we able to recognize foodstuffs like strawberries, coffee, barbecued meat or freshly boiled potatoes by smell alone? Foodstuffs contain more than 10,000 different volatile substances. But only around 230 of these determine the odor of the food we eat. Narrowing it down further, between just 3 and 40 of these key odors are responsible for encoding the typical smell of an individual foodstuff. These compounds are then decoded by around 400 olfactory receptors in the nose. Scientists have presented these findings in chemistry journal Angewandte Chemie International.

Complementing the five basic tastes of sweet, bitter, salty, sour and umami, a large variety of odors also contribute to the overall sensory impression of a foodstuff. In recent decades, approximately 10,000 volatile food compounds have been identified. Scientists from Technische Universität München (TUM) and the German Research Center for Food Chemistry (DFA) have carried out a meta-analysis on the odorant patterns of 227 food samples.

How cognac gets its complex notes

They were surprised to find that the almost unlimited variety of food smells is based on 230 key odorants. In addition, each foodstuff has its own odor code comprised of a core group of between just 3 and 40 of the 230 key odorants – in specific concentrations. These small groups of odorous substances are what give all kinds of foodstuffs – from pineapple to wine to roast meat – their unmistakable aromas.

“So for example, the smell of cultured butter is encoded by a combination of just 3 key molecules, but fresh strawberries have 12,” explains Prof. Peter Schieberle from the TUM Chair of Food Chemistry. Cognac is the most complex of all: the smell of this popular brandy is attributable to 36 key molecules.

The chemical odor codes are translated into olfactory stimulus patterns when food is consumed. For this, the key odorous substances have to interact with one or more of the 400 olfactory receptors in the nose. “A combination of between just few key odorants creates an authentic perception of odors. This is all the more surprising given that the olfactory quality of the combinations is not determined by the individual components,” says Prof. Thomas Hofmann from the TUM Chair of Food Chemistry and Molecular Sensory Science.

When people perceive external chemical odor patterns and process them in the brain, the individual odor components do not just add up. Rather, the individual olfactory notes are translated into a new odor identity. “In view of the chemical odor code combination possibilities and the 400 or so different olfactory receptors, it appears that there is a more or less unlimited number of discernible odor qualities,” claims Schieberle.

So far, scientists have identified 42 receptors that respond to food odors – with the majority binding multiple odor molecules. “By mapping the odorous substances of the 230 currently known key odors, scientists can test which receptor combinations are ‘reserved’ for food odors,” explains Hofmann. “This will help us explain the biological relevance of odors in even greater detail.”

The mapping of odor codes opens up new possibilities for biotechnology applications. For example, knowing more about the odor codes of crop plants and fruits at molecular level can be useful to breeders. In the past, increasing yield and ground coverage had a much higher priority than sensory quality. The findings also lay the scientific groundwork for the next generation of aroma products, which use the potential of optimized biosynthetic pathways in plants for industrial-scale production of high-quality food odorants.

This latest odorant mapping will also enable more precise natural simulation of odors. This will bring us a step closer to new applications in mobile communication systems such as sending olfactory messages by smartphone or even the development of bioelectronic noses.