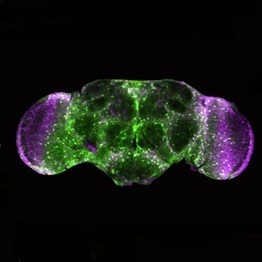 Scientists at the Max Planck Institute for Biology of Ageing in Cologne and University College London have now unearthed the way in which a specific genetic mutation leads to neuronal damage in two serious afflictions. In rare cases, patients may even suffer from these two diseases, amyotrophic lateral sclerosis and frontotemporal dementia, at the same time.

Amyotrophic lateral sclerosis is a devastating type of motor neuron disease that causes rapid weakening of muscles and death. Frontotemporal dementia is the second most common cause of dementia in people under 65. It causes distressing symptoms, including changes in personality and behaviour and problems with language and thinking.The DNA of affected patients contains a mutation of the gene C9orf72: There are thousands of repeats of a specific short segment of genetic material, whereas in unaffected persons, there are only up to thirty copies of this segment. This specific genetic alteration is the cause of illness in around eight percent of patients with this type of motor neuron disease or dementia. Eight percent is a relatively high proportion. For instance, less than one percent of the causes in Alzheimer’s disease are genetic.

Researchers at the Max Planck Institute for Biology of Ageing, the Institute of Neurology and Institute for Healthy Ageing at University College London have now discovered that the repeats in the mutant gene cause neurodegeneration by making toxic proteins.

Fruitflies can undergo neurodegeneration in a similar way to humans

Previously it was thought that the problem could be a consequence of disruption of the gene by the inserted repeats. Another theory was that the repeats produce a different type of toxic RNA molecule. It now turns out that the repeats in the mutant gene can produce a variety of proteins and that two of these are extremely toxic to nerve cells. Both are highly enriched in arginine, an amino acid.

To pinpoint the role of the toxic proteins, the researchers produced artificial repeat segments that could produce potentially toxic RNA and protein or only toxic RNA or only protein. They then introduced them into the nerve cells of fruit flies, which can undergo neurodegeneration in a similar way to humans. Repeat segments that made both RNA and protein caused striking neurodegeneration and reduced the lifespan of the flies, showing that they are a good organism in which to study these diseases. Interestingly, the protein-only repeat segments caused just as bad a neurodegeneration. In contrast, the RNA-only segments were harmless, pinpointing the role of toxic proteins in these diseases. The proteins that contained arginine were the most toxic.

Research News of the Max-Planck-Gesellschaft, August 11, 2014