Potential basis for the treatment and prevention of Parkinson’s disease 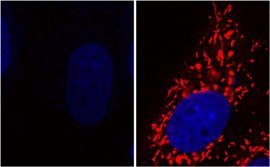 Inactivation of the DJ-1 gene results in mitochondrial dysfunction (left), which can be restored by glycolate or D-lactate (right). Active mitochondria are shown in red, DNA is shown in blue [less]
© MPI-CBG

Parkinson’s disease affects neurons in the Substantia nigra brain region – their mitochondrial activity ceases and the cells die. Researchers at the Max Planck Institute of Molecular Cell Biology and Genetics show that supplying D-lactate or glycolate, two products of the gene DJ-1, can stop and even counteract this process: Adding the substances to cultured HeLa cells and to cells of the nematode C. elegans restored the activity of mitochondria and prevented the degeneration of neurons. They also showed that the two substances rescued the toxic effects of the weed killer Paraquat. Cells that had been treated with this herbicide, which is known to cause a Parkinson’s like harm of mitochondria, recovered after the addition of the two substances. Both glycolic and D-lactic acids occur naturally in unripe fruits and certain kinds of yoghurt.

Teymuras Kurzchalia and Tony Hyman both have labs at the Max Planck Institute of Molecular Cell Biology and Genetics with rather different research programs – but both happened to stumble upon the gene DJ-1 and joined forces. This gene, originally thought of as an oncogene, has been linked to Parkinson’s disease since 2003. Recent studies showed that DJ-1 belongs to a novel glyxolase family. The major function of these genes is assumed to detoxify aggressive aldehyde by-products from mitochondrial metabolism. The Dresden research team now showed that the products of DJ-1, D-lactate and glycolate, are actually required to maintain the high mitochondrial potential and thus can prevent the degeneration of neurons implicated in Parkinson’s disease.

Their experiments proved that both substances are lifesavers for neurons: Adding them to affected cells, in other words cells treated with the environmental poison Paraquat or with a down-regulated DJ-1, decreased the toxic effect of the herbicide, restored the activity of the mitochondria and thus ensured the survival of the neurons.

„We do not yet understand how exactly D-lactate and glycolate achieve this curative and preventive effect, but the next step will be to investigate the molecular mechanism underlying this process”, say Hyman and Kurzchalia. In addition to further molecular investigation, they also have more concrete plans for the future: As Kurzchalia says “we can develop a yoghurt enriched with D-lactate: It could serve as a protection against Parkinson’s and is actually very tasty at the same time!“ This is why the researchers have filed a patent for their finding.

Many diseases are associated with a decline in mitochondrial activity, not only Parkinson’s. Thus, the researchers believe that the DJ1-products could have a general role in protecting cells from decline.

Research news of the Max-Planck-Gesellschaft, July 31, 2014