Bats use the evening sky’s polarization pattern for orientation 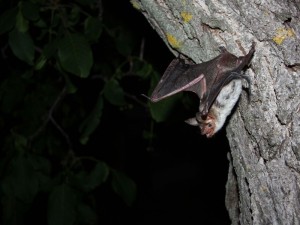 Animals can use varying sensory modalities for orientation, some of which might be very different from ours. Some bird species for example take the polarization pattern produced by sunlight in the atmosphere to calibrate their orientation systems. Now researchers from the Max Planck Institute for Ornithology in Seewiesen, Germany, and Queen’s University Belfast have discovered with colleagues from Israel that a night active mammal, the greater mouse-eared bat, has the capability to orient using polarized light. These bats use the polarization pattern of the evening sky to calibrate their inner compass.

In the course of evolution manifold sensory systems developed which allowed animals varying possibilities to perceive their environment. Many insect species for example, but also some fish, amphibians, reptiles and birds can see polarized light. Polarized light forms as a result of sunlight being scattered in the atmosphere. The sky’s polarization pattern can be used by animals as a compass, well-known examples being the orientation of honeybees, desert ants or migratory birds. Even humans can perceive polarized light to some degree. Subject to certain conditions we can see a so called Haidinger’s brush, a diffuse yellowish form, which however, has no known function. The fact that mammals can also make use of this sensory perception was not known so far.

An international team of bat researchers including Stefan Greif from the Max Planck Institute for Ornithology, Seewiesen, and from the Queen’s University Belfast now found exactly that. Their study shows that the greater mouse-eared bat (Myotis myotis) can use the polarized light of the evening sky to calibrate their orientation system, which is based on the Earth’s magnetic field.

The researchers caught 70 female mouse-eared bats in a cave in North-eastern Bulgaria. During dusk they exposed half of the bats to a polarization direction which was shifted 90 degrees from the natural spectrum. The other half of the animals was placed in similar experimental boxes but with a natural polarization direction. Long after nightfall the bats were brought to two different sites some 20 kilometres away from their home roost. There they were released after the scientists equipped them with tiny radio transmitters to follow their flight trajectories on their way back to the cave. Those animals that experienced a 90 degrees shifted polarization pattern at sunset, vanished in a direction which deviated about 90 degrees from the control group.

With this simple experiment the researchers showed for the first time that bats can use the polarization pattern of the evening sky to calibrate their inner compass for orientation. The precise mechanism however, is still unknown so far. “Further behavioural and physiological studies are necessary to understand this fascinating new sensory capability”, says Stefan Greif, lead author of this study.

Research News of the Max-Planck-Gesellschaft, July 22, 2014