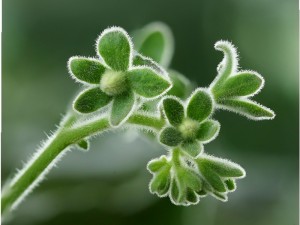 The sequencing of the wild tomato Solanum pennellii provides the basis for explaining certain plant characteristics, such as their increased drought tolerance, thereby also establishing a basis for selective cultivation.
© RWTH Aachen, A. Vogel and R. Knauf

Solanum pennellii, a wild tomato species endemic to the Andean region in South America, is characterised by its ability to tolerate extreme stress, such as drought. Solanum pennellii has frequently been crossed to harness this characteristic for cultivated tomatoes. Up until now, scientists did not know which genes were responsible for the stress tolerance. An international team of scientists, headed by Alisdair Fernie of the Max Planck Institute of Molecular Plant Physiology and Björn Usadel from the RWTH Aachen University and the Forschungszentrum Jülich, has now sequenced and analysed the genome of the wild tomato. Their results are published in a current study which establishes the basis for understanding the stress tolerance and also the basis for future tomato cultivation.

Tomatoes are native to South America and were brought to Europe in the 16th century by Spanish explorers. The plants that we know today, which produce large red fruit, are the result of intensive cultivation. During this process, many of the original characteristics of the wild plants disappeared from the gene pool of cultivated tomatoes.

Thus, compared to the cultivated species Solanum lycopersicum, wild tomatoes are frequently much more tolerant to unfavourable growth conditions such as dry or salty soil. In addition, wild species that are resistant to fungal diseases could also be identified. In order to harness these characteristics for cultivated tomatoes, they are crossed with their related wild species. The descendants of these hybrids are then crossed again several times with the cultivated tomatoes in a process known as backcrossing. The aim of this process is to confine the share of genetic information in the wild plants to a few areas in the genome and thus also to the sought-after characteristics. The resulting lines are called introgression lines.

Solanum pennellii is a wild tomato species that is often used to produce introgression lines due to its extreme stress tolerance. The lines produced when S. pennellii and S. lycopersicum are crossed are interesting for a number of reasons, including the fruit’s modified chemical composition or their increased tolerance to drought and salt. Such characteristics are also known as quantitative traits. These introgression lines have already been used to identify a large number of so-called quantitative trait loci. „These are regions in the genome that are responsible for the expression of the genes underlying certain traits,“ explains Björn Usadel from the RWTH Aachen University and the Forschungszentrum Jülich.

Prior to this, however, very little was known about the genes underlying the quantitative trait loci. This was mainly due to a lack of information about the S. pennellii genome sequence. The recently published study bridges this gap. The collaborative project involving an international research team was initially headed by Alisdair Fernie and Björn Usadel at the Max Planck Institute of Molecular Plant Physiology. After Usadel moved to RWTH Aachen University and Forschungszentrum Jülich, the project was continued in the three institutions.

„By sequencing this wild tomato, we have created the basis for the genetic explanation for the various loci, such as tolerance to drought,“ says Alisdair Fernie. „For example, we were able to identify a gene in S. pennellii that is responsible for modifying the chemical composition of the cuticle, the waxy layer on the leaves.“ This gene leads to increased wax content in the cuticle, which the scientists were also able to prove through chemical analyses. The natural function of the cuticle – to prevent loss of water through the leaves – is enhanced even further by the increased wax content.

By comparing genes known to confer stress tolerance with the quantitative trait loci of the introgression lines, the international team of scientists was able to identify 100 other candidate genes, which could be responsible for increased tolerance to drought or high salt contents. „The sequencing enabled us to create a valuable source for explaining the characteristics of introgression lines,“ says Usadel, and adds: „There are still a large number of known loci that will need to be explained using genome sequences.“

Elucidating the genetic basis of quantitative traits is a key to the future improvement of our cultivated plants, and therefore also our most important food sources.

Research News of the Max-Planck-Gesellschaft, October 14, 2014