Sleeping Behaviour Does the moon affect our sleep?

Does the moon affect our sleep? 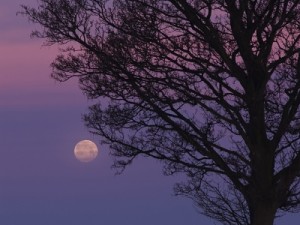 Many people report sleeplessness around the time of full moon. The question whether or not there is a scientific measurable lunar influence still remains elusive. © Buntschatten / pixelio.de

Popular beliefs about the influence of the moon on humans widely exist. Many people report sleeplessness around the time of full moon. In contrast to earlier studies, scientists from the Max Planck Institute of Psychiatry in Munich did not observe any correlation between human sleep and the lunar phases. The researchers analyzed preexisting data of a large cohort of volunteers and their sleep nights. Further identification of mostly unpublished null findings suggests that the conflicting results of previous studies might be due to a publication bias.

For centuries, people have believed that the moon cycle influences human health, behavior and physiology. Folklore mainly links the full moon with sleeplessness. But what about the scientific background?

Several studies searched in re-analyses of pre-existing datasets on human sleep for a lunar effect, although the results were quite varying and the effects on sleep have rarely been assessed with objective measures, such as a sleep EEG. In some studies women appeared more affected by the moon phase, in others men. Two analyses of datasets from 2013 and 2014, each including between 30 and 50 volunteers, agreed on shorter total sleep duration in the nights around full moon. However, both studies came to conflicting results in other variables. For example, in one analysis the beginning of the REM-sleep phase in which we mainly dream was delayed around new moon, whereas the other study observed the longest delay around full moon.

To overcome the problem of possible chance findings in small study samples, scientists now analyzed the sleep data of overall 1,265 volunteers during 2,097 nights. “Investigating this large cohort of test persons and sleep nights, we were unable to replicate previous findings,” states Martin Dresler, neuroscientist at the Max Planck Institute of Psychiatry in Munich, Germany, and the Donders Institute for Brain, Cognition and Behaviour in Nijmegen, Netherlands. “We could not observe a statistical relevant correlation between human sleep and the lunar phases.” Further, his team identified several unpublished null findings including cumulative analyses of more than 20,000 sleep nights, which suggest that the conflicting results might be an example of a publication bias (i.e. the file drawer problem).

The file drawer problem describes the phenomenon, that many studies may be conducted but never reported – they remain in the file drawer. One much-discussed publication bias in science, medicine and pharmacy is the tendency to report experimental results that are positive or show a significant finding and to omit results that are negative or inconclusive.

Up to now, the influence of the lunar cycle on human sleep was investigated in re-analyses of earlier studies which originally followed different purposes. “To overcome the obvious limitations of retrospective data analysis, carefully controlled studies specifically designed for the test of lunar cycle effects on sleep in large samples are required for a definite answer,” comments Dresler.

Research News of the Max-Planck-Gesellschaft, June 16, 2014.